NOTE: This article is older than 12 months

More than 1,800 students graduated from USC this week in the largest round of graduation ceremonies ever held by the University.

Twelves ceremonies from 10-12 April featured plenty of pomp and circumstance as USC awarded degrees, certificates and diplomas and celebrated the success of its high achievers.

Chancellor’s Medals were presented to three students who contributed significantly to USC and the general community while achieving outstanding academic results.

An Honorary Doctorate was awarded to Chief Justice Susan Kiefel, who in 2017 became the first female Chief Justice to be appointed to the High Court of Australia.

Videos of each of the ceremonies can be viewed online at the University’s website at: www.usc.edu.au/graduation/

The graduate responses featured some moving and entertaining speeches, including one by Paramedic Science graduate Jason Carter, who this year started studying a Doctor of Medicine with Griffith University at the Sunshine Coast University Hospital.

Jason, who received a USC University Medal on Wednesday for achieving a GPA of more than 6.8 out of a possible 7, outlined his journey from being a troubled teen to a talented medical student.

His graduate response, entitled “small steps lead to giant leaps”, can be viewed at: youtu.be/mIXGvVwtl8g 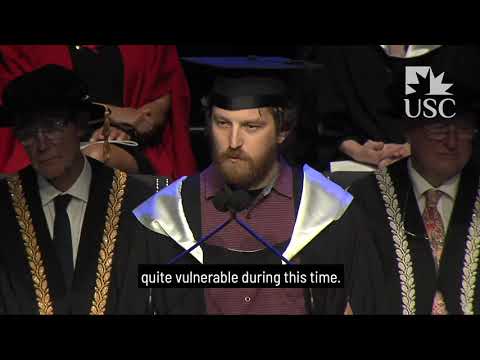 Hashtag yoga: Study into effects of Instagram images on women 24 November 2020 | A lack of diversity in social media depictions of yoga has prompted a USC researcher to begin a study into the effect this might have on women’s body image and participation in yoga. More information...
Study: Who’s stealing the spanner crabs? 25 November 2020 | A USC study will determine if sharks are wrongly getting a bad rap for taking a bite out of Australia’s commercial spanner crab industry. More information...
High-tech sandbox to help farmers, USC students visualise water flow on land 23 November 2020 | It’s colourful, tactile and full of sand, but this box built by a USC Civil Engineering Honours student is far from a children’s toy. More information...
USC leads research into stocks of popular eating fish 12 November 2020 | Recreational and commercial fishers are being asked to play their part in important marine research by keeping an eye out for mahi mahi off the southern Queensland coastline that are sporting long orange ribbon... More information...
Anthology shines light on Creative Writing graduate 16 November 2020 | A USC 2018 Master’s graduate has taken her fascination with lighthouses to the next level as both editor and contributor to a newly published anthology focused on her favourite subject. More information...
Business leader is Outstanding Alumnus for 2020 15 October 2020 | Colin Vale of Caloundra, who graduated with a Master of Business Administration from the University in 2010 while leading the Anitua Group on Lihir Island in PNG, was among four winners announced today. More information...
USC social media class trends at Aus/NZ awards 14 October 2020 | The likes and positive comments are flowing for USC’s Social Media degree program after it gained high recognition at the 2020 Australian and New Zealand Social Media Marketing Awards. More information...
83% bushfire survival of endangered macadamia: USC research 01 October 2020 | USC-led research in Bulburin National Park, between Bundaberg and Gladstone, has recorded 83 percent survival of the wild population of an endangered native macadamia nut plant, following the 2019-20 summer... More information...
Research finds new way to help frail older people 30 September 2020 | A $6.9 million global research project involving USC as the only Australian partner has developed a new monitoring and intervention system to slow or even reverse the progression of frailty among older adults. More information...
Blue carbon focus for ocean-loving world champion 24 September 2020 | The coronavirus pandemic may have upset world champion stand-up paddleboarder Brianna Orams’ plans to compete in the sport’s 2020 Euro Tour – but the USC Environmental Science student refuses to see it as a... More information...
comments powered by Disqus