We just presented Sarina Russo with the inaugural 'Golden Demerit' certificate of suffering for his services toward the deprivation of unemployed workers' dignity! 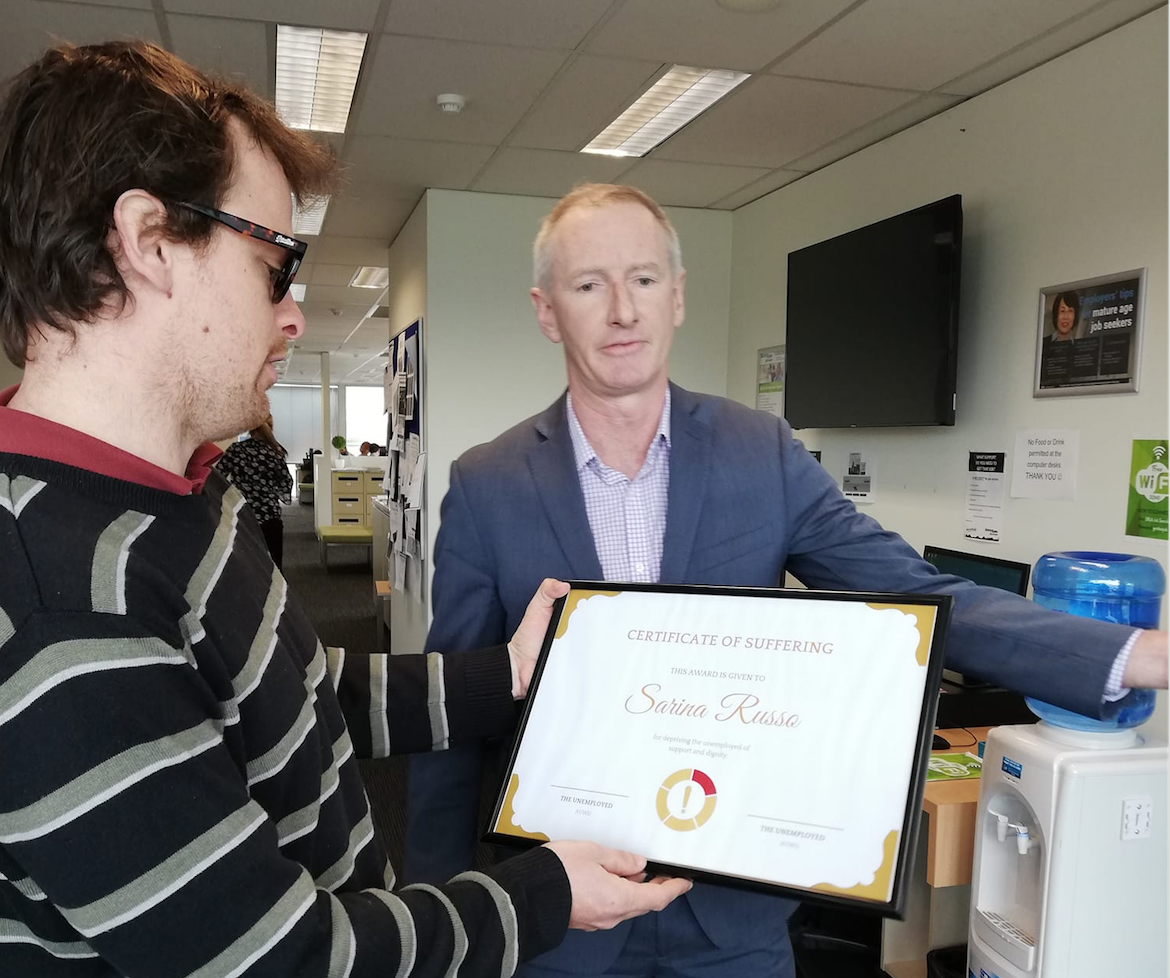 Due to the hard work of Adrian and his team, the majority of AUWU members who called our hotline over the last month 'nominated' Sarina Russo for the Golden Demerit Certificate of Suffering.

You can nominate your job agency by telling your story on the AUWU forum here.

If you would like to present a Golden Demerit Certificate of Suffering award to your local Sarina Russo office, please sign up to our campaigns team here or send us an email here.

The AUWU is a volunteer organisation run by the unemployed for the unemployed with no paid staff or political affiliations. To help the AUWU continue the work it is doing, we would greatly appreciate a donation through our website here. No amount is too small.

A lot of people come to the AUWU for help with their difficult jobactive / DES agencies through our advocacy hotline and we keep tabs on which ones we hear about the most. In 2018-19, private job agencies like Sarina Russo processed 2.3 million payment suspensions. According to the Guardian, one in five are later found to be incorrect.

Sarina Russo wins the prize for the most dishonourable mentions (well, actually it was a close tie between Sarina Russo and Max Employment and Sarina wins the coin toss). Sarina Russo represented 13% of cases we dealt with on the advocacy line. The agency is currently celebrating 40 years of operation, which means 40 years of making millions on government contracts to be the parole officers of the unemployed.

The way the job agency system is set up, private agencies are incentivized to punish for profit. Some agencies take this to extreme lengths. The JobActive and Disability Employment Service agencies have at their fingertips the ability to cut people off Newstart - effectively forcing people into dire poverty and potential homelessness. There is no oversight by the government, and unemployed workers have no right of appeal.
With the flick of a button they like to send people into financial panic - too many times this is because of a mistake made by the agency or because the claimant didn't meet some absurd expectations of 'compliance'. These agencies make enormous profits from government contracts, for example Sarina Russo's 2015-2020 contract is worth $606M. For all that money they do very little when it comes to genuinely helping people find suitable work - its money wasted on a bureaucratic wormhole of meaningless activities that we're forced to participate in. We can't let them get away with this anymore. Let's make an example of the worst offenders. They exploit us, bully us, force us into poverty and bore us to death but together we can shut them down!

Data from our hotline:

Yesterday was easy, today we really need you 05 August 2020 | We launched a strike, we got some fanfare, the minister attacked us. More information...
Can you call Sunny Coast MP's to #KeepTheRate? 14 July 2020 | As you may know the LNP government is planning to snap back the rate of JobSeeker to $40 a day plunging many into poverty. This is unacceptable. More information...
Join us at the Raise The Rate For Good forum next week 03 July 2020 | Next Wednesday the Australian Council of Social Services will host a forum for people and organisations interested in campaigning to #KeepTheRate of JobSeeker, Youth Allowance and related payments at $1115 per... More information...
New level of job agency intimidation: let us know if they’ve visited you 02 July 2020 | A member of the Australian Unemployed Workers' Union has been visited twice within two hours at his home by 'Help' Employment – a gross new level of intimidation and harassment. More information...
An important victory: ACTU supports #KeepTheRate 27 June 2020 | Late on Friday the Australian Council of Trade Unions launched a petition that includes a demand for the government to "keep the rate of JobSeeker at the rate it is now with the Coronavirus supplement". More information...
UPDATE: No penalties for not participating in 'mutual' obligations 17 June 2020 | The AUWU has confirmed that there are no penalties for JobSeekers (and those on related payments) who do not participate in 'mutual' obligations activities during the current phase of reintroduction. More information...
Join the AUWU Sunshine Coast Branch 04 June 2020 | AUWU members have created a branch to help & connect all unemployed, underemployed, and unwaged workers + all recipients of social security in the Sunshine Coast. More information...
This Thursday, 4 June, at Cotton Tree Park Protest #BlackLivesMatter and action on #AboriginalDeathsInCustudy​ 03 June 2020 | AUWU Branches are standing in solidarity with the protests against police brutality happening in the US and Australia. And are encouraging our members to support the actions of the first nations people standing up... More information...
AUWU Sunshine Coast Virtual Branch Meeting This Saturday 03 June 2020 | There is a branch meeting this Saturday. Come and let's talk about how we can keep the rate raised! More information...
AUWU Sunshine Coast Virtual Branch Meeting This Saturday 08 May 2020 | There is a branch meeting this Saturday. Come and meet some like minded people! More information...
comments powered by Disqus